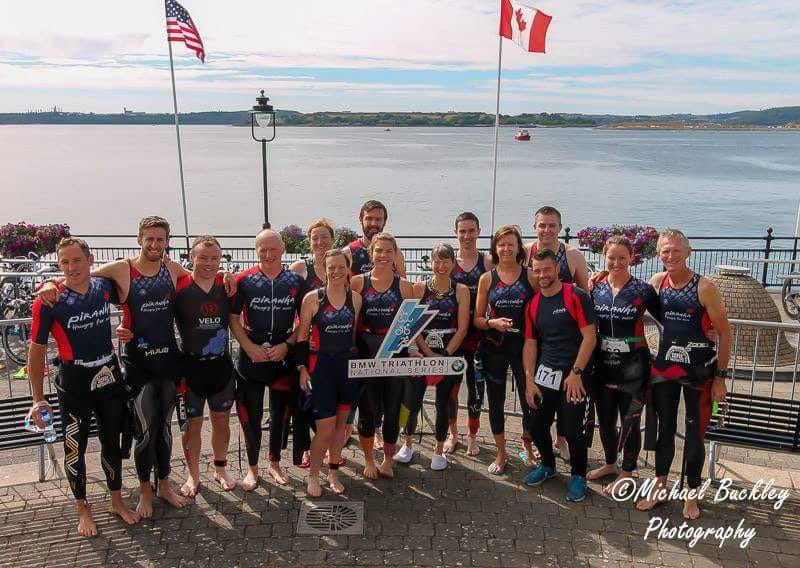 The Piranha crew who escaped from Spike Island this year was about 20 in number and all successfully escaped the famous prison island in Cobh, Co. Cork. This is my escape story ………

It was my first time to attempt the Jailbreak triathlon, I was intrigued by the concept when I heard other club members talk about it last year. Basically, you are brought by boat to Spike Island, which housed a prison up to 1883, you are dropped off on the island and then swim from Spike island back to Cobh. Sounded straight forward …………..No buoys to navigate around …………. just swim straight from shore to shore…….use the DOT on the building to sight!!!

Then once that was done, there is the small matter of a 40k bike ride and to run a few loops around Cobh.

So, we all gathered on sunny Saturday morning at the promenade in Cobh to get set up for the Jailbreak, the Piranhas were well outnumbered, there was lots in the blue & navy of the Wicklow Tri club, lots of the black & orange of the Cobh Tri Club and plenty of black & pink of the South Coast Tri Club . Once transition closed we gathered around the bandstand to get a race briefing from the race Director Billy Burke, this was one race briefing that I needed to hear, as I looked out with trepidation at the Island that we had to ‘escape’ from.  Once the briefing was finished we all went to the quayside to get transported to Spike island, the first boat chugged away and then along came the next boat which was a speed boat, about 15 people jumped aboard, I thought I would have to wait for the next boat but the captain said room for 3 more in the back . I had the seat beside the captain and we took off like a rocket with screams of joy from the Piranha crew , he gave us a few high speed turns around the harbour with screams of more , more , more …. no one wanted to get off the speed boat but alas we arrived at our destination and we all disembarked. 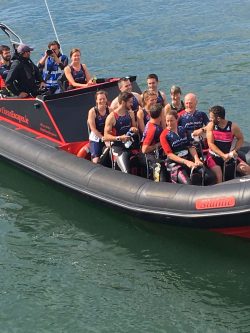 We gathered at the beach, more and more arriving with each boat trip. The sun was out, we were all melting with the heat and everyone dying to get into the water to cool down. Then the time arrived , we got into the water for a quick swim to acclimatise to the water, then back to the shoreline, hold, hold, then the countdown 10, 9, 8……….3,2,1, go and a sea of white swimhats headed for Cobh, one hour to do it or game over!!! 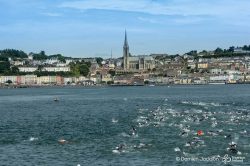 My plan was to use Marie Moran’s wet suit as a guide, Marie had done this race before and from our practice swims in Seapoint I was used to seeing Marie’s bright orange wet suit out of the corner of my eye while swimming alongside her but alas Marie was too fast for me on the day . I could just see the orange wet suit disappear into the distance ahead.  After the first few strokes I looked up and the task seemed almost impossible, I must be mad I told myself , how was I going to manage this?? Then I told myself to cop on and get swimming, so off I went again.

Plan A didn’t work (Marie’s orange wetsuit) and so I needed a plan B, the boat captain had mentioned the tidal flow in the bay, so I headed towards the Cathedral and hoped the tide would help me when I got nearer the shore. The Cathedral looked so far away but I kept going , trying to remember all the swim tips that I had been given over the past year and a half since joining Piranha. As I got nearer I could see the dot on the building (thought they were joking about that one but I could see the orange building and the DOT on the building next door), then I could see the two yellow buoys at the exit ramp, I was nearly there, a few more strokes and I was back on dry land.

Then it was into the transition area find my bike and off to Fota island , there was a big hill out of the town and then a lovely spin out the coast , round Fota island , onto Glounthaune , around a final roundabout and then back again. I was overtaken by a few other competitors on the way out and I even managed to overtake a few myself. After the turnaround , I was pleasantly surprised to see there were a few people behind me . I told myself to keep going, I wasn’t last! 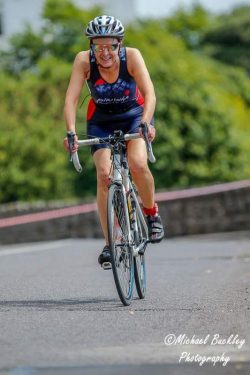 At one stage I could see in the distance a cyclist with a BMC cycle top on. I remembered fondly the beautiful red BMC carbon bike that I had used on warm weather training in Lanzarote earlier in the year and wished I had it now. I pushed on and overtook the BMC cyclist, not knowing if he was in the race or not. After passing him out, a few minutes later he came up beside me:

‘did you swim earlier?’ he asked,

‘yes I swam from Spike Island’ I said

‘Well aren’t you a great girl’ he said in a lilting Cork accent.

‘And how far are you cycling ? ‘ he asked

‘And I suppose you are running too’ he said

‘Well aren’t you a great girl’ he said.

So I told the great girl she was not cycling fast enough and had better get peddling faster. On I went and finally made it back to transition for the last leg of the race.

For those of you who have run with me on a Tuesday night in Clontarf, I am the slow one who is usually a mile behind everyone at the end of the session.  Today would be no different. We had 4 loops of Cobh harbour area to run around, at the start of each loop we were given an orange jailbreak wristband, I took the first one, then ran along the promenade , then past the yellow houses, up the HILL !!! , (not as bad as the steps in the Harbourman two weeks ago but bad none the less), then over the bridge, along the high road with the lovely houses, past the parked bus, to the water station (drink one and one over my head to cool down) , down the hill.  There was lots of cheering along the route from spectators and Piranhas who had finished their race. Lots of encouragement from other competitors along the route too.

Then round 2 , another wrist band, down the promenade, past the yellow houses, up the hill, over the bridge, down the high road, past the bus, another drink of water, water over the head  and down the hill and start round 3 . You get the picture for the round 3 & 4 . Then it was up the last hill and through the finish line and my race was over.

I had completed my 3rd ever Olympic triathlon and was thrilled to have done so. My previous two were not great races, the first was Belfast in September 2017, lashing rain, leg cramp in swim which came back on the run, touch of hypothermia by end of race. With some therapy I may eventually forget about that race!! The next Olympic was the Harbourman a few weeks ago, hottest race in triathlon history (so I believe) , ended up with bad sunburn and would not have made it through the run without John Lyons coming back to re-run the last 1k with me, thanks again John.

As I sat in Kellys Pub after the Jailbreak race enjoying a well-deserved cold beer, the text came through from Coretime telling me the results were in. My race time was 3 hours 12 minutes, which I was thrilled with. I managed to take 36 minutes off my Harbourman time and 20 minutes off my Belfast race, I couldn’t have been happier.

So what about the others on the day, we had David Hatton & Fintan Phelan who did their first Olympic distance race that day and both had great races. Unfortunately John Wallnut did not get to finish the race due to a leg injury but he had a great swim and bike on the day .

Aside from the AG winners, the rest of the Piranha Jailbreak crew also had great races, I marvel at the training put in by athletes like Martina Duignan, Marie Moran and Ava Whelan and it showed in their great results. We also had John Kearney, fresh from his Austrian Ironman competing, if it was me I would still be resting. Colm Fitzsimons and Carl Byrne also recently new to Triathlon had great races and even found time to came back on the course to encourage slow coaches like me along.

Then we had Paul Mooney a Cork native, back from his recent Ironman race in Austria, Paul was part of the winning relay team on the day.

A big shout out to Mags Wallnut and Ronan Whelan (Ava’s husband) for the support along the course, shouting encouragement to myself and others along the route.

I later found out I was the last person to finish the Jailbreak race , Pablo’s official race report I am sure will confirm this, but that did not take away from the great feeling I had completing this race. It was a great swim, enjoyable race, a great weekend away and one I will come back for again.

I will also take on board the advises from the other jailbreakers this weekend – consider a new bike, remember where you put your bike in transition, stop faffing around with socks in transition, eat & drink more on the bike, stop talking to strange men while out racing and note to self MUST train more !!!!!